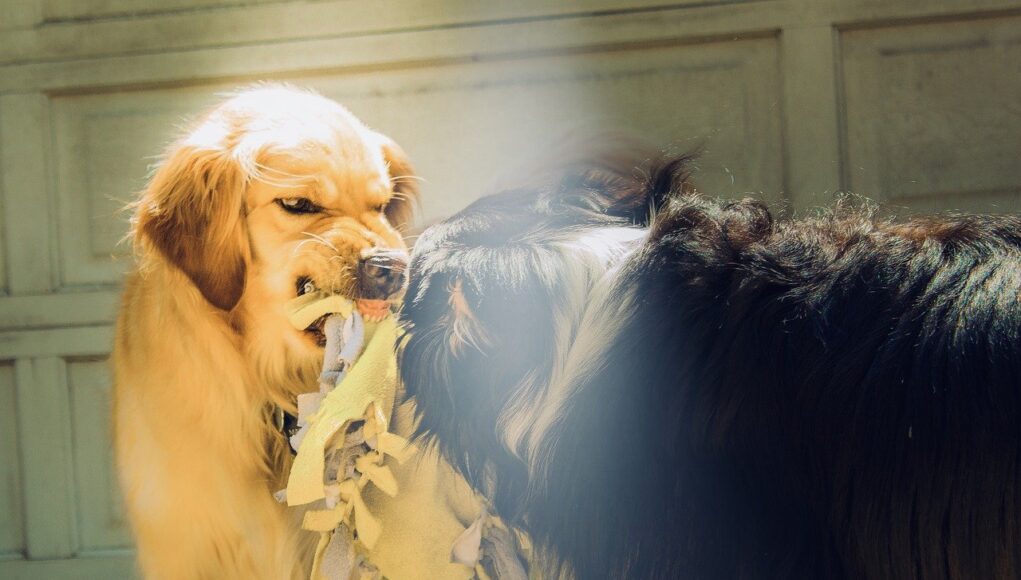 Have you ever wondered what makes one dog more aggressive than another?

The US has nearly 90 million dogs, so they’re a substantial part of our lives one way or another. But which are the most aggressive dog breeds, and what are the reasons behind their behavior?

You deserve an unbiased view on the topic, which is why we compiled a lot of information on breeds and what might make them prone to violence. The study used for this list focused on the following:

While some pups may have more of a dominant or angry side than others, it’s usually the way they’re raised and trained that seems to be the problem.

Much like us, each dog has its own personality, but some recent scientific evidence shows a link between dog bites and specific breeds. Here’s what we found out.

We’ve compiled this list using direct evidence from a study on the rates of dog bites published in the International Journal of Pediatric Otorhinolaryngology.

Pitbulls are notoriously one of the most aggressive dog breeds.

But that’s a bit muddled. Pitbull is an umbrella term for a range of pups with specific characteristics that vary dramatically. Because of this, the AKC and UKC don’t even recognize the Pitbull as a breed group.

Pitbull mixes are often descendants of bulldogs and terriers. The problem is that many other purebreds, like the American Bulldog, look exactly like what people describe as a Pitbull, so it’s challenging to know the difference.

The study points this out as well. However, Pitbulls are responsible for the most bites by a known breed — 22.5%.

They also have one of the most damaging bites, with 235 pounds per square inch (PSI).

Most of the time, if you get bitten by a dog, it’s from an unknown mixed breed.

You can describe some of its characteristics, but that often leads to the mislabelling of dangerous dog breeds. If you’re bitten, try your best to get specifics on size, body type, weight, colour, or, better yet, a photo.

I searched far and wide, and the most recent statistics from 2011 show that around 53% of pups in the US are mixed-breeds.

No wonder they take the number two spot. There are just way more of them.

Mixed breeds fall right behind the pit bull, with 21.2% of bites.

One of the most aggressive large dog breeds from the study is the German Shepherd. Mainly  due to the pup being used as a service animal, particularly for the police. So what the public sees of this breed is not the best indicator as they’re trained to act this way.

According to the study, this dog is responsible for 17.8% of bites. The breed also has one of the strongest bites, with a PSI of 238. It can cause a tremendous amount of damage.

Fun fact: The dog with the most potent bite is the Kangal — 743 PSI.

This small breed is surprising to find on a most aggressive dog breeds list, but there’s a good reason why it’s here.

The Jack Russel was bred as a hunting dog and could hunt with larger hounds. Yet, it’s small and compact enough to dive on prey without being noticed.

These distinct traits are still found in terriers today, meaning they have lots of energy. If not exercised enough, they’ll get aggressive simply to spend some of that energy.

Jack Russels can be very aggressive when not handled correctly. They have the instinct to protect themselves in an unknown situation.

They’re classically known as one of the most vicious dogs.

This breed has been around since the Roman Empire, so it comes with a seriously long lineage of traits and behaviors that can’t be undone in a day.

The Rottweiler is a protection dog. If its family is under threat, that very distinctive growl warning gets up and running in seconds.

Training all pups is vital, but even more so for these breeds. If you let Rottweilers think they can run around doing anything, someone’s going to get hurt. Responsible owners protect and train their animals.

This fluffy face with long ears is the last thing we associate with the most aggressive dog breeds. But they were bred for hunting, and it’s hard to beat such instincts.

Studies suggest that Cocker Spaniels can have “Cocker rage” — a sudden onset of aggression for no apparent reason. It can be towards the owner or anyone else around the dog at the time.

Please note that’s the exception rather than the rule. These pups are usually very loveable and cuddly. Some studies show this rage could be a form of epilepsy or bad breeding genetics.

Also, their bites won’t cause as much damage as some of the other listed puppers.

It’s a bit of a mix since the most aggressive dog breeds study doesn’t mention details, and the AKC recognizes six types of retrievers. So we can’t tell you precisely which one is more aggressive. Still, like all breeds, they all share the same characteristics.

It’s surprising to see them on the list, considering they’re also the most popular dog breed in the US. We know them as gentle and obedient, but they’ve shown aggressive behavior, particularly the puppies from abusive and negligent homes.

Retrievers certainly have a lot of energy, which causes dog behavior problems if they’re not exercised properly.

These fluff balls were nowhere near our radar of the meanest dogs.

They’ve been around for centuries, often as Chinese emperors’ companions and guard dogs. So maybe that’s where the aggressive streak comes in.

The Chow Chow is an active and alert breed that needs regular exercise and play. But due to their strength and size, we suggest stocking on indestructible dog toys, like the Benebone Wishbone dog chew.

Also, you need to train these pups from a young age to prevent aggression.

The Collie is generally known for its sweet and proud nature and not so much as violent dog breeds. Plus, they’re great with kids and are usually suggested as one of the most family-friendly dog breeds.

Collie aggression resulting in biting can be dangerous. Although not as damaging as other breeds, they can cause serious injury, particularly to children.

This breed is brilliant and loves to work hard during training. To help with the latter, you can pick from the extensive range of collars for training your pup.

These pups need exercise, so they’re not for families who spend most of their days on the couch. Putting a Collie in a confined space like a backyard for extended periods can trigger their aggression.

Last but not least on the list of most aggressive and mean dog breeds is the fluffy and outgoing Husky.

Overall, the dog is known to be friendly and loyal to its owners, but what about other people?

Different factors cause dog aggression, but the main one remains fear. So, in uncertain situations, Huskies are likely to get agitated. With a PSI of 320, you wouldn’t want to get bitten.

That’s why it’s essential to train pups from a young age. That’s how they build awareness of their environments.

What Makes a Mean Dog?

We know genetics affects a dog’s temperament, but the honest truth is humans bear the most responsibility for mean dogs.

It’s among the biggest reasons why the most aggressive dog breeds in the world even exist.

Training their dog is the most crucial responsibility of the owner. But we love our puppies so much that we sometimes forget they’re still animals.

If you don’t start training from a young age, your dog will follow its instinct, attacking anyone and anything it deems a threat.

But there’s a big difference between what we perceive as dangerous and what pups do. While we have cognitive brains that can identify unsafe situations, dogs don’t. So they can lash out in unknown environments.

The mistreatment of any animal is inexcusable, and many dominant dog breeds attack only because that’s what they’re used to.

If a pup has to fight its entire life for food, care, shelter, or even water, chances are it’ll have that instinct for the rest of its life.

Still, training can help, and animal shelter statistics show that such places truly try everything they can to help mistreated animals.

Did you know that 71% of domestic violence victims report the attackers also abuse their animals? It’s stats like these that make us question the meanest dog breeds. We can’t blame the dogs. With 20 women and men experiencing assault each minute in the US, just imagine the number of abused animals.

There are around 70 million stray dogs in the US, and some are abandoned by their owners. Unsurprisingly, the American Pit Bull Terrier is the most abandoned dog in the US. One million of them are euthanized each year.

Animal shelters report that nearly 50% of pets are rehomed or taken to the shelter because of animal behavioral problems. Besides, adopters are reluctant to welcome the world’s most aggressive dog breeds into their homes.

But most of these dogs come from previously inadequate living conditions. All they need is training, love, and support.

That’s why we encourage our readers to adopt, not shop. Plus, did you know 25% of pups in shelters are purebred? You never know. Your future furry bestie could be waiting for you there right now.

All pup owners should be aware of food aggression because it affects up to 20% of dogs. It’s a territorial behavior that dogs display around food — growling, snapping, lunging, or biting.

Unfortunately, since so many dogs are mistreated or have a genetic instinct to protect their resources, this can happen even with the friendliest dog. The most food aggressive dog breeds include English Springer Spaniels, German Shepherds, and Rottweilers.

If you notice signs of food aggression, remove any children around the place where the dog’s eating.

Keep in mind that this problematic behavior can be stopped with training and rehabilitation. But it takes time, so be patient with your pooch.

Some breeds indeed have aggressive tendencies, but you know what? Every single dog can inflict harm on others.

Remember, dogs are animals, and we can’t hear them out. That’s why it’s challenging to know what they could be suffering from — abuse, injury, pain, or even hunger.

Even though it has the largest database on pups, you won’t find the most aggressive dog breeds on an AKC list. We can’t put a blanket term like aggression on an entire dog breed.

If you want to be a dog owner, you have to understand the responsibilities that go into it. Taking care of a pup takes time, money, and a lot of love.

Some breeds appear to be more aggressive than others. These include the Pitbull, Mixed breeds, German Shepherd, Jack Russell Terrier, Rottweiler, Cocker Spaniel, Retriever, Chow Chow, Collie, and Husky.

Unfortunately, most dogs that appear aggressive are often misrepresented. Most people aren’t dog experts, so victims of dog attacks usually name the wrong breed. Pitbulls tend to take the blame.

A lot of dog behavioral problems are due to humans not caring for or training their animals properly. Such treatments can lead to abuse and negligence, making a dog hostile.

The most aggressive dog breeds are the ones that need the most love and care. Sadly, they’re some of the least adopted. But with the proper training and enough time, any of these pups could become a fantastic lifelong companion.

18 of the Best Indoor Dogs for Home Companions

Do Dogs Have Feelings?