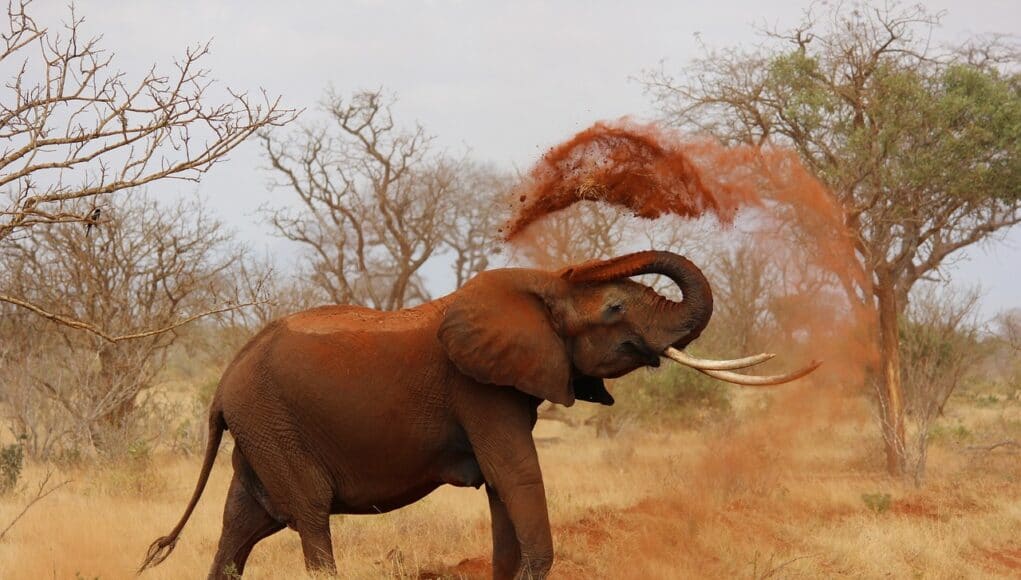 Fun facts about elephants tell us more about one of the most fascinating creatures on our planet. But how much do we really know?

For some, seeing an elephant in person is pretty normal, but it’s a once-in-a-lifetime opportunity for others. So let’s learn how you can enjoy the experience and understand the life of these amazing creatures.

Elephants are simply amazing. We like to think of them as the gentle giants of the wild. So let’s learn more about these fascinating animals.

But that’s not all. Let’s have a look at more cool facts about elephants.

So, we have a good idea about how elephants look and behave, but what type of environment do they need to survive?

There is a big range of elephant habitats based on the species, but here is some info on what elephants generally need in their environment.

3. The African Bush Elephant Lives in the Savanna, Relying on Yearly Rains To Survive.

But what are the main differences between elephant species? Let’s delve a bit deeper to find out.

There are two main species of elephant, African and Asian. But each has subspecies with unique characteristics. So let’s first look into fun facts about Asian elephants.

4. The Asian Elephant Is Between 8–10 Feet at the Shoulder.

These are some general facts, but what about the subspecies? Let’s check out some fun facts about Indian elephants.

Now let’s look into some fun facts about Sumatran elephants.

6. The Sumatran Elephant Is Almost Bald, and Females Rarely Have Tusks.

But what about the biggest of the species? Let’s explore fun facts about African elephants.

7. The African Elephant Can Weigh Over 6.6 Tons.

As you can see, these animals are struggling to stay alive, so we need to do all we can to help. But the African bush elephant isn’t alone, let’s check out some fun facts about African forest elephants.

8. The African Forest Elephant Has Straighter Tusks and Is Darker in Color

That’s why it’s so important that we end poaching and habitat loss, no matter the subspecies. Keeping this in mind, let’s have a look at some adorable calf facts.

The only thing sweeter than an elephant is a baby elephant. I’ve had the pleasure of seeing them in the wild, and it’s one of the most endearing sights.

Are you ready for more crazy elephant facts about calves?

There’s quite a lot more to learn about these fascinating creatures.

These animals are pretty intelligent and gentle.

11. Elephants Can Recognize Themselves in the Mirror.

Here are more unique facts about elephants and their behavior.

But we need to learn the most important facts about elephants so we can save them.

What We Can’t Ignore About Elephants

So, we’ve learned some fun facts about elephants. However, these creatures are in serious trouble and are heading for extinction.

14. Asian Elephants Have Only 15% of Their Original Range.

Before we wrap up, let’s check a few more interesting facts about elephants.

If these fun facts about elephants teach us anything, it’s that elephants should stay in the wild.

Elephants are truly unique animals that we can learn a lot from. They’re gentle and have a profound sense of family and belonging. Also, these lovely giants are quite protective of their herd.

What’s more, their bodies can store two gallons of water in the trunk and walk 90 miles a day.

Fun facts about elephants show us that these amazing creatures are fundamental for ecosystems. But their numbers are dwindling. So we need to do everything we can to help them.

How can I help elephant population numbers?

The most significant change you can make on a personal level is to never buy an ivory product. Many countries have banned ivory, which helped a lot, but elephants are quickly becoming the next rhino. While the black market trade is illegal, it’s still a billion-dollar-a-year industry.

What do I call a male elephant?

Here are some fun facts about male elephants: the males are called bulls, the females — cows, and their babies are calves. Moreover, male elephants are bigger than their female counterparts, particularly the African bush elephant, which can reach over six tonnes.

What are the closest relatives of elephants?

Surprisingly, genetic studies show a close relative correlation between elephants and sea cows. Other fun facts about elephants reveal that horses and rhinos are more closely related to elephants than the aardvark. The aardvark was believed to be the second closest relative. Still, recent studies showed a whole slew of genetically similar species.