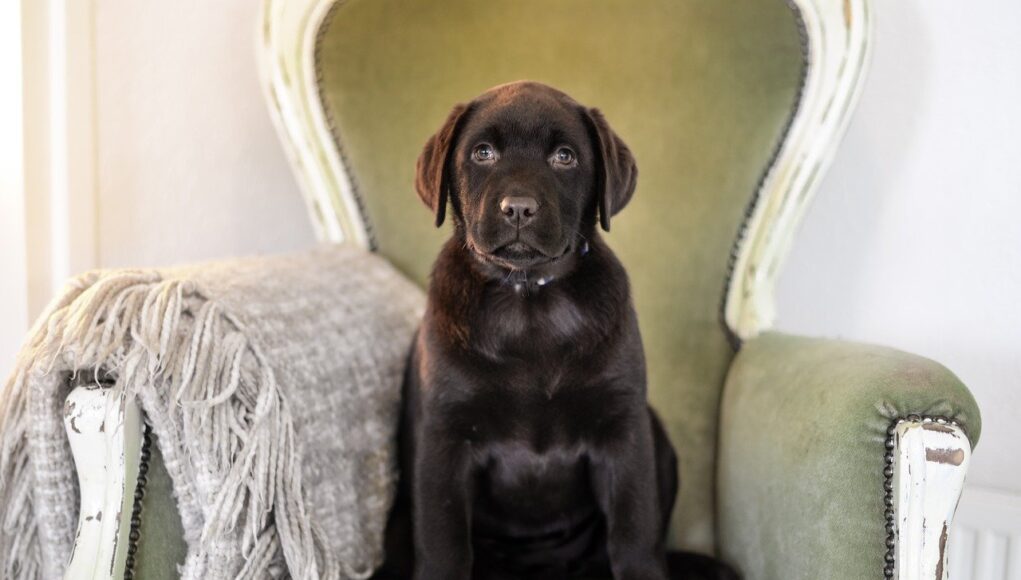 The Mini Labrador Retriever has become a popular trend among dog lovers in recent years. A tiny version of the friendliest and most playful dog? Sign us in!

But is this version of America’s favorite dog different? How is it bred, and are the health complications that come with it worth it?

Keep reading to find out:

About the Full-Sized Labrador Retriever

Labrador Retrievers’ ancestors come from Newfoundland, Canada. Canadian fishermen initially used them as waterdogs, but in the 1800s, English gentlemen fell in love with these pups and took some back to England.

The Labrador’s cuteness, friendly and outgoing nature made it America’s favorite dog since 1991. Nowadays, we have two types of labs — English and American. The Mini Labrador isn’t officially a separate type or breed. We’ll discuss why in a second.

The American Lab is athletic, energetic, and bred more for its retrieving qualities than its looks. These dogs weren’t pets but hunting companions. So they were expected to be lean and resilient.

In contrast, the English labs are heavier, shorter, and calmer. These pups were bred as pets and often taken to dog shows. They’re the perfect pet for first-time owners or families with small children.

What Is a Mini Labrador Retriever?

Miniature labs are essentially the same as regular ones — friendly and playful. But they’re a bit shorter.

These dogs aren’t recognized as a separate Labrador breed. The reason for this is the decrease in size, which often results from canine dwarfism. That’s a genetic mutation, causing the legs to grow shorter.

The History of the Mini Lab

The Labrador ancestor we know today was a smaller pup, known as the St John’s Water Dog. It was an excellent swimmer that was used to retrieve fish from the icy Canadian waters. Not long after, British aristocrats took the dog to England and started breeding it. And the Labrador was born.

Due to the desire for its traits in a smaller pup, Mini Labs gained popularity in the 1990s. But it’s questionable whether Mini Lab puppy breeding is humane.

There are three ways to breed for a more miniature Labrador:

It’s hard to predict the adult size of a Mini Labrador. That largely depends on the breeding method. Sadly, some breeders are more interested in profit than in the puppies’ health and happiness.

One of the two genes for dwarfism in dogs (SD1 and SD2) has to be mutated in both parents for the puppy to have dwarfism. Genetic tests can confirm whether your dog’s a disease carrier. If it is, when mated with another carrier, they’ll produce a puppy with dwarfism.

It’s the most common way for breeders to achieve smaller Labradors.

But dwarfism isn’t always noticeable in adult dogs. Most become smaller due to the condition, but some end up looking pretty similar to regular Retrievers. So there’s no guarantee that a puppy with dwarfism will stay small.

A small Labrador can get 3–10 inches shorter and weigh 20–40 lbs less than an average one. As you can see, the difference isn’t necessarily substantial.

Also, dogs with dwarfism almost always develop painful diseases because of genetic mutation. That should be enough to discourage you from purchasing a dwarf puppy. Intentionally breeding for diseased dogs is inhumane.

In every puppy litter, you’ll find some doggies that are just smaller than the rest. They’re called runts. Mini Lab dogs that were the runt of the litter are usually normal and healthy.

But these smaller pups are often pushed away by their siblings, and they get to feed last from their mom. Since first milk is rich in antibodies that keep the puppy healthy, getting less can lead to malnourishment and decreased immunity.

So breeding a generation of runts can result in puppies suffering from immune dysfunctions.

You can also get small Labrador Retrievers by crossbreeding Labs with smaller breeds like the Corgi.

Many believe this decreases the puppies’ chance of inheriting pre-existing genetic conditions. But no solid scientific studies support this.

Crossbreeding can also be dangerous and unethical. Few breeders consider the possible risks of a tiny breed mother struggling to birth large puppies. Puppy mills are also common in the crossbreeding world, with 2.6 million puppies sold each year.

So before going to the pet store and buying the newest designer dog — consider adopting. It’s the best and most noble way to care for a dog.

Miniature Labrador pups are very similar to the regular-sized ones. And what makes them so desirable is their great Labrador temperament and their need for less space.

Miniature Labs are just as active and playful. Plus, the Labrador Retriever is one of the best dog breeds for apartment living. They’re calm, loyal, and social. They love being around people, other dogs and are great with kids.

The Mini Labrador breed is prone to many health conditions. Depending on the breeding, they might even shorten its lifespan. Mini Labs with dwarfism often live only five years, while the average life length of a Labrador Retriever is 10–12 years.

Leg malformation is common in Labradors with dwarfism.

Even though Mini Labradors are usually smaller, they share the same huge appetite. It makes them prone to overeating and obesity.

If you own a Mini Lab, make sure to track its calorie intake and don’t get overboard with treats. Following a reliable dog feeding chart can also be helpful.

As a result of dwarfism, Mini Labrador puppies often suffer from swollen joints. This inflammatory process can be highly unpleasant since it makes walking, running, and playing painful for your dog.

Joint relief supplements for dogs will ease your Mini Lab’s suffering. You can choose between treats, pills, and food. Pick what your puppy enjoys the most, or you’ll have a hard time convincing your dog to take it.

Dwarfism in dogs is also associated with abnormal head growth. This includes the muzzle. It can lead to breathing problems and decrease the quality of life of your mini pet.

How Long Do Mini Labradors Live?

The average Labrador Retriever’s life span is 10–14 years. And some minis also live such long and happy lives.

But in the case of Mini Labradors with dwarfism, the puppies might live much less. Depending on the severity of the condition, some Miniature Labs might only live around five years.

How to Take Care of a Mini Labrador

These puppies are predisposed to many health conditions, so they need more attention. Mini Labs are active and joyful like their big relatives, but you’ll need to take special care to keep them happy and healthy.

How Much Does a Mini Labrador Eat per Day

Labradors love food. They’ll eat everything you give them. But due to its obesity predisposition, you’ll have to keep your small pet on a strict diet.

Use a digital scale to ensure you’re giving your dog the right amount of food. Also, try feeding your pup fewer treats. Alternatively, you can account for the treats throughout the day by giving less food in the evening.

Do Mini Labs Shed a Lot?

Labrador Retrievers shed a lot. So be prepared — the mini version won’t make this easier.

Regular brushing will help you take control over your hairy monster. You can even look into the best dog clippers and groom your pup at home.

We also recommend investing in a powerful vacuum. These dogs leave hair everywhere.

Washing your Mini Labrador regularly is another essential part of dog maintenance. It’ll keep your dog clean and odorless. Plus, it will remove any dandruff and keep your Lab’s fur and skin healthy.

Don’t overdo washing. Your puppy needs the natural oils in its skin for a healthy coat. Washing once a month to a month and a half is perfect.

The toy Labrador isn’t the only small Labrador. Here are other options you might consider if looking for the traits of America’s favorite dog.

Mixing a Labrador with a different small breed dog can often achieve the beautiful Labrador personality in a smaller package.

If you’re looking for a dog that looks like a Lab but is smaller, these breeds might work for you.

It’s not unlikely to find a Mini Labrador in a shelter. Dwarfism isn’t common in Labradors, but it happens from time to time.

Millions of dogs are euthanized in shelters every year due to overpopulation.

So even if you can’t find the mini pet you’re looking for, many beautiful puppies wait there. Adopt and save a life.

The tiny Labrador is highly predisposed to health complications.

It might sound cute to have a Mini Lab, but in reality, these dogs are rarely bred humanely. Also, they’re often destined to struggle throughout their lives.

A Mini Labrador is as joyful and friendly as a normal-sized one. It’s also just as time-consuming (if not more due to its health) and hair dispersing.

Before investing in a mini version, consider getting a regular Labrador. If they’re too big for you, check the local shelter. It might offer you a dozen different small doggies instead.

Is Your Dog Not Eating? Here’s What You Can Do