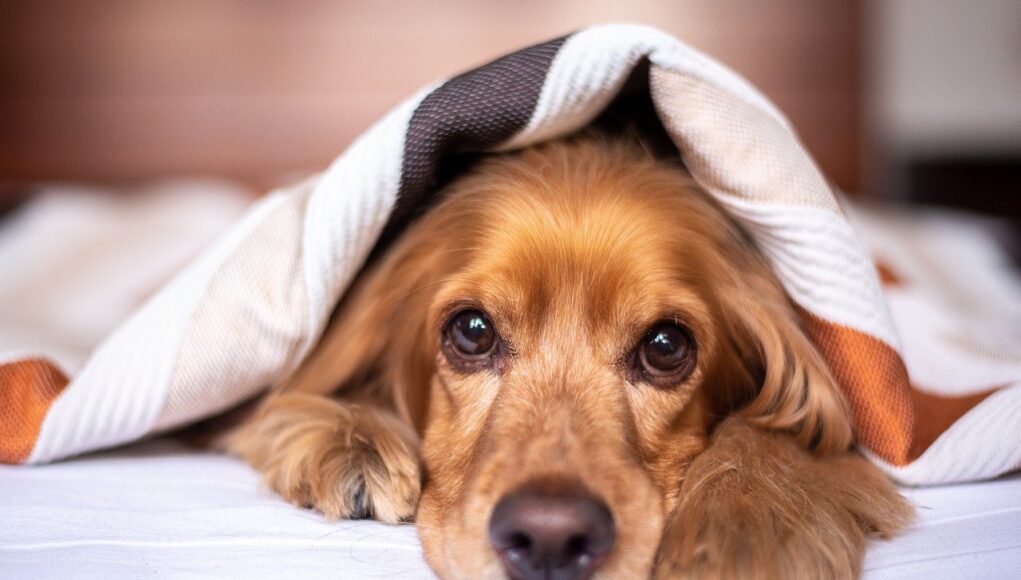 Do dogs have feelings? Or are they more like machines, operating with biological parts, unable to experience any emotional bonds?

Anyone who has seen a dog in their life knows for sure that they have feelings. While they’re less emotionally advanced than us, puppies experience all basic feelings like joy, anger, and fear.

But how do we know this? And how can we distinguish between different doggy feelings? Let’s find the answers to all these questions and more:

We know that our favorite fluffy pals have feelings. After all, we’ve all experienced or at least seen a loving doggy lick. But do they feel just like us? Not really.

A dog has the emotional intelligence of a two-year-old child. So our beloved pets can feel basic emotions, like joy and fear, but can’t experience more complex ones, like guilt or pride.

But you shouldn’t expect dogs to have feelings the same way you do.

In humans, emotions are an evolutionary adaptation. And everything points out it’s the same for our furry pals. When dogs feel fear, their brain activates in the same way as in humans.

But dog emotions research shows that their response is more primal. So in a frightening situation, they either run away or stay and fight. The human world is a bit more complex — some people love watching horror movies even though it’s scary.

What this means is that we receive different rewards from emotions. Dogs’ reward for feeling fear is increasing their chances of survival. The same goes for humans, but we can also bond over common fears with others of our kind (like watching horror movies).

The topic of dogs and emotions is still a bit controversial. That’s because when we think about a puppy’s ability to feel, we usually fall into the trap of anthropomorphism — attributing human emotions, traits, and intentions to non-human entities.

Dogs can’t feel pride or shame and most probably don’t have the internal monologues you have. They also don’t spend their time contemplating whether to bark or not to bark.

Our furballs feel and act simultaneously. In contrast, we usually need to stop and understand our feelings before we commit to action.

What Research on Dogs’ Emotions Tells Us

A remarkable proof that dogs have feelings is the experiment which found that dogs have empathy toward humans in distress. The scientists positioned the dogs’ owners behind a closed door and asked them to simulate crying. On hearing the sounds, the dogs became distressed and tried to open the door and go to their humans.

Another study also showed that dogs could recognize and differentiate between positive and negative emotions of other dogs and humans. They showed the dogs pictures of human and dog faces showing different emotions (happy vs. angry) and played a recording of the same person or dog vocalizing. The dogs stared significantly longer at the faces that matched the voice (happy face + happy voice) than the ones that didn’t.

Last but not least, the thing you’ve been wondering from the beginning — do dogs love us? Sadly, the science is inconclusive. Even though many puppy owners, myself included, would say that their dog loves them, it’s just hard to prove.

And what if, in the doggy world, “love” has nothing to do with the emotion we attribute to it?

Our pets depend on us as they depend on their mommies when they’re little. Their “love” for us might be a form of gratitude for being providers of food and hugs. And that wouldn’t be sad. They have their unique way of feeling affection.

How Do We Know That Dogs Have Feelings?

We can answer the question: “Do dogs have feelings?” in many ways. The most common indicators are their reactions to stimuli, the hormones their bodies secrete, and body language.

The way your pets act can tell you how they feel. For example, if your dog is jumping around you, wagging its tail, and vocalizing excitedly, your pup’s most probably happy to see you.

In contrast, if your dog is anxious, it might be panting, yawning excessively, and chasing its tail. Anxiety in dogs is also one of the reasons dogs lick their paws.

Do dogs have feelings for their owners?

If we’re trying to answer that question,  we’ll probably go to the nearest scientist, poke them with a stick, and ask them to do some hormonal experiments. Well, at least that’s what I would do, being the science nerd that I am.

Oxytocin is the hormone of attachment, bonding, and positive state of mind. Scientists have observed that when we pet our fluffy besties, the oxytocin levels in their bodies increase. The same happens if we cuddle them, and even when we stare lovingly into their eyes.

What’s even more interesting is that research on shelter dogs has shown that human contact decreases the stress hormone cortisol in dogs. Three days after housing, the cortisol levels were almost two times lower in furry pals that had human contact.

What Feelings Do Dogs Have?

Dogs are capable of experiencing all basic emotions. In the chart below, you’ll see how a child’s emotional range progresses and where a dog’s emotional growth stops.

Keep in mind that the chart is incomplete as it lacks some feelings and emotions we’re about to discuss.

It’s probably the easiest emotion to recognize in a dog. Our puppers are balls of joy and excitement.

All owners who go to work daily know this doggy feeling well. As soon as you open the front door, your buddy starts barking enthusiastically, jumping, and wagging its tail in all conceivable directions. That, my friend, is the meaning of puppy joy.

Sometimes, when your doggy is just chilling on its own, and you try to pet it, your pet might give you “the look.”

It’s more common in cats, but dogs also experience the emotion associated with it. What it says is: “Leave me alone.”

Absolutely! It might not be the same kind you expect from them, but it’s still love. Dogs think differently, so naturally, they feel differently than us.

In the end, it’s still love, attachment, and affection.

Among the signs of littermate syndrome in young puppies is the fear of new people or dogs. Also, many dogs are afraid of fireworks or thunderstorms. Fear in dogs can even escalate into phobias.

So your furry pal can definitely feel afraid. It’s an emotion that has helped dogs survive millions of years before they finally become our best friends.

The canine lack of self-consciousness interferes with their ability to feel sad.

But dogs can still get depressed or anxious. It could result from separation anxiety, loneliness, a change of environment or habits. There are multiple ways to relieve anxiety in dogs.

Puppy stress relief treats can be helpful if you have an anxious dog. But you should investigate what exactly makes your doggy feel the way it does.

For example, if you see that your pet lacks enough exercise and is depressed because of it — try to include more active time in your dog’s routine.

Here’s another proof that dogs have feelings.

When learning a new command, my dog often gets frustrated before understanding what I want from him. Poor Rainy just wants his treats, and I dare want from him to give paw? Shame on me.

When pups don’t know how to communicate their wants or don’t understand yours, they might start barking, pacing, or whining. Those are the signs of a frustrated puppy.

Do Dogs Have Feelings of Jealousy?

When it comes to doggy toys, your pup’s probably not keen on sharing them with other dogs. That’s normal behavior. Most often, dogs aren’t aggressive about toys and would allow you to play with them. If that’s not the case, consider contacting a dog behavioral specialist.

But what happens when you’re outside and another puppy approaches? You start giving it your dog’s toys and all your attention. In return, you get hateful looks, barking, and attention-seeking. Yep — your doggy’s jealous.

Studies on dogs and emotions also found that our puppies can feel envy. In their experiment, Friederike Range and colleagues trained dogs to raise their paws. Every time the dogs succeeded, they received a treat.

But the scientists gave rewards to only one group of pups while the other didn’t get any. Can you guess what happened?

Do dogs have emotions like anticipation? This one is easy. Think about every time your dog realizes it’s about to go on a walk. Your pup will start jumping, whining, barking, and anticipating the adventure.

It’s how our pets get used to our routines and learn to anticipate their meals, walks, or playtime.

Do Dogs Have Empathy?

Yes, your furball is capable of empathy. One study found that dogs would approach a crying person and lick, nuzzle, and sniff them to calm them down.

Do Dogs Get Their Feelings Hurt?

Even though dogs aren’t as emotionally advanced as we are, they can feel hurt.

Abused dogs have been shown to mistrust humans, cower, and avoid contact. But can you hurt your dog’s feelings more subtly without even realizing it?

Your puppy would feel hurt if you’re not spending time with it and if you’re not showing it love. Dogs are pack animals. They don’t thrive well on their own — they need you to be around and play with them.

Laughing or punishing your puppy for being afraid can also hurt its feelings. Fear is normal in dogs, just as it is in humans. So try to understand what your pet is scared of and provide comforting snuggles instead of punishment.

Guilt is a higher emotion unfamiliar to dogs. That’s why punishing dogs for breaking something won’t solve your problems — they can’t understand why you’re punishing them.

Your dog won’t feel guilty about tearing your favorite dress, but it’ll start fearing you if you punish it for it.

Our understanding of dogs’ behavior and feelings can strengthen our bond and help us understand ourselves better.

A dog has the emotional intelligence of a two-year-old child. They can feel upset, excited, fearful, or depressed, but they can’t feel guilt, shame, or pride.

Dogs are also great at showing their emotions. While they can’t talk, just like small children, they keep nothing to themselves.

A happy dog would wag its tail when it sees you and jump and whine with excitement. In contrast, a scared pup would tug its tail between its legs. Our great four-legged friends can also feel empathy, disgust, and affection.

So do dogs have feelings?

Absolutely! And if we don’t want to hurt them, we need to take the time to study our dogs’ body language. Dogs will always tell us how they feel if we’re willing to listen.

Is Your Dog Not Eating? Here’s What You Can Do