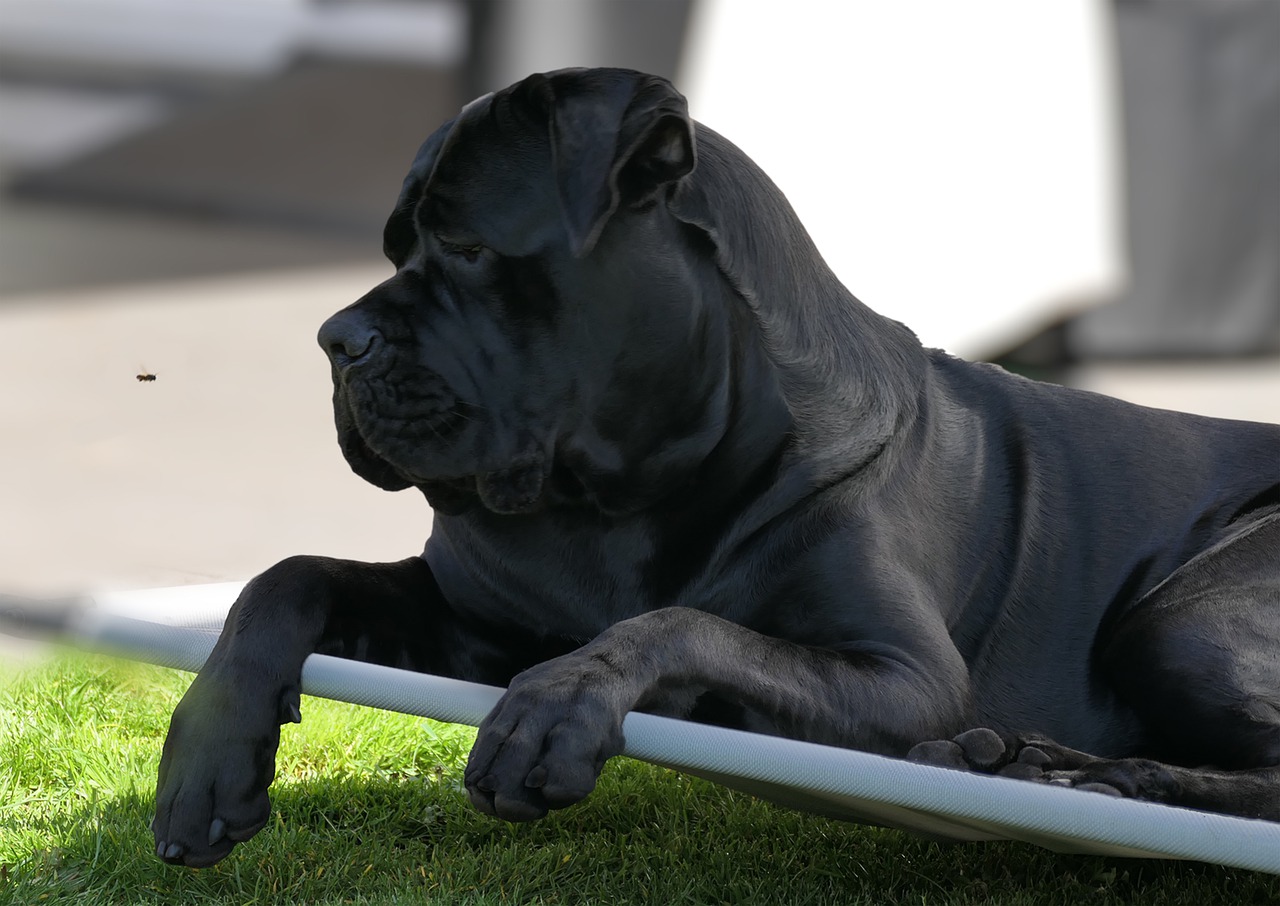 The giant Cane Corso has a square face and a muscular body that make many of us admire it from a distance. No matter how many dogs we’ve been around and looked after in our homes, it’s only natural to feel intimidated by the size of this majestic dog.

These intelligent and bossy pets were bred as warriors and bodyguards. They have no interest in anything outside their family. If you’re planning on getting one or just want to know more about this breed, read on to find out:

These incredible giants were bred as working dogs and make awesome companions when matched with experienced and confident owners. Behind their intimidating appearance, sturdy body, and bossy character, you’ll find an incredibly loyal and playful pal that will accompany you on walks and jogging sessions.

While these dogs are famous for their aggression, that character only comes to light if you mistreat them or don’t train them properly.

Once you establish yourself as the household boss, King Corso Mastiff will be easy to train and eager to please you. Just give them a job to occupy their mind, and you’ll get a fantastic guard dog and noble companion.

Its Lineage Dates Back to Ancient Roman Times

To better understand the personality and temperament of this dog, you should learn more about its ancestors. The breed’s lineage goes back to Ancient Rome. Its ancestor was the Roman Molossus — a now extinct Mastiff type of dog.

Due to their size and strength, King Cane Corso dogs were used as war dogs in the past. But now, they’re mostly guarding and working dogs.

“Cane” is an Italian word for “dog,” and “Corso” stands for “guardian.” Hence, they’re also famous as one of the best bodyguards in the canine world. When well trained and socialized, they make awesome family dogs and protectors.

AKC Recognized Them Officially in 2010

Although the purebred Cane Corso was brought to the US in 1988, the AKC recognized the breed in 2010.

The Ente Nazionale della Cinofilia Italiana first recognized the dogs in 1994, and the Fédération Cynologique Internationale provisionally accepted them in 1996. Their full recognition in this federation was in 2007.

This Italian Mastiff is a large breed with a height between 23 and 27 inches and a weight between 90 and 120 pounds. They have a square head with a flat forehead and a rectangular muzzle. The ears are often cropped, looking like triangles.

These dogs have almond-shaped eyes that are mostly dark brown, which is their standard. No matter how cute a Cane Corso with blue eyes looks, that color disqualifies the dog as it indicates a genetic fault.

They’re athletic and well-built with a broad chest. They’re sturdy and strong but have elegant moves.

Their appearance simply screams dominance. That big, muscular body and confident attitude make the Corso one of the best bodyguards.

You’ll also notice that dominance in training. Although Corsos learn new things easily, thanks to their intelligence, they need a lot of repetitions and training classes since puppyhood. Their dominance is a hard deal, so they need a patient, strong, and confident leader.

The Cane Corso ear crop is a trademark of their appearance, but it has very much to do with their health, too.

The Coat Is Similar to a Cow’s

Cane Corsos have a unique coat. It’s cow-like, meaning it’s coarse and short. If you take good care of it, it will also be shiny, making your dog look regal. The breed also has a thick undercoat, so expect heavy shedding twice a year.

Brindling is also common. The rare types have a white mark on their chest, throat, or toes.

Temperament — A Projection of Confidence & Power

The bossy and energetic Corso needs plenty of exercise, socialization, and training. They can be aggressive in the wrong hands, so firm leadership is a must.

These dogs won’t ask for attention or run into your lap. Their even temper, reserved attitude, and stable pose make them look intimidating. But if you train and socialize them properly, they make awesome family pets.

Once you teach it to respect your rules and boundaries, a Cane Corso that’s full grown will be an excellent companion. Also, the breed understands your tone of voice, so it’s easily trainable.

No matter how intimidating they might seem at first, they become the most loyal and protective dogs once you establish a bond. They might be vigorous, but they’ll always remain faithful to you. Reportedly, they’re also incredibly sensitive, meaning they tune in with the moods of family members.

Boredom Is Followed by Destructive Behavior

Due to their intelligence, Cane Corsos need mental stimulation. Since this is a working bred, you need to give it a job if you want to avoid destruction. And just having a yard to roam isn’t enough for the Cane Corso temperament. If you’re not an active person, take the dog to obedience, agility, or other training to keep it busy.

Once bored, Corsos find amusement on their own. And believe us, that’s not something you’d like to witness unless you’re a fan of getting your furniture destroyed.

Aside from mental stimulation, a Cane Corso Italian Mastiff requires plenty of physical exercise. It’s not an apartment-friendly dog. It needs as much running and roaming as you can provide.

Given their bossy nature, these fellows need training as early as possible. You should take them to obedience and socialization classes as soon as you welcome them home.

These dogs are very loyal, protective, and warm to their owners, children included, but don’t expect them to greet your neighbors or your friends. What’s more, they won’t show much affection to you, but their devotion and love are as big as they can be. That’s just the Cane Corso personality.

They’re family-only dogs, with zero interest in anything else. So you should be careful with small animals and children outside your family. Until you train your dog properly, it’ll see them as prey.

They Enjoy “Talking” to Us

The King Corso Mastiff won’t show as much affection as you might expect, but it’ll definitely try to communicate with you. Howling is one way of talking, but they also snort, snuffle, and make a roo-roo sound (between barking and singing).

Be aware of their howling. They do it to get attention or declare their presence to other dogs. Other reasons can be separation anxiety or because your dog is ill or hurt.

Since they’re among the largest dog breeds, Corsos need plenty of food, but that doesn’t mean they can eat anytime or anything they want. Introducing a high balanced diet is a must if you want a healthy pet.

According to Cane Corso breeders, you should follow these rules for a healthy diet:

Remember that due to their size and weight, Corsos’ joints suffer a lot. That’s why we recommend choosing a recipe that targets joint health and boosts collagen levels, like Blue Buffalo Wilderness for large dogs or Wellness CORE Puppy on Amazon.

If you wonder what’s the right food for large puppies, research more brands and determine what your dog needs before deciding.

What to Expect From a Cane Corso Health-Wise

Generally, Cane Corsos are healthy dogs. But they’re still prone to some issues. That’s why, when you buy or adopt a dog, you should learn more about the parents’ health.

The Cane Corso life expectancy is around 9–12 years. It mainly depends on the genes and the dog’s lifestyle. Still, with regular vet checkups and a proper diet, they can live longer.

Apart from the minor conditions like ear and eye infections, weight gain, and skin irritation,  Corsos may experience the following serious conditions:

Although not very common in dogs, Corsos can get idiopathic epilepsy. It’s a condition of seizures with an unknown cause. It usually occurs around the second year. Depending on the severity, you might control it with drug therapy.

It’s a genetic disease that causes problems in the inner workings of the hip joint. That’s prevalent among large breeds with the Cane Corso weight and size. The common signs include limping and reduced interest in walking or running.

Reportedly, CBD oils help with dogs’ aching joints. Still, you can also treat it with supplements and other pain-relieving medication. We like New Zealand Green Lipped Mussel as it’s a natural way to support your pet’s joint health.

Cherry eye, entropion, and ectropion are the three abnormalities these dogs might get. The first one is when the pink, fleshy part of the corner becomes swollen outward. The other two are when the eyelid folds inward or outwards. With regular vet checkups and quick treatment, these conditions are manageable.

Demodex Mange is caused by Demodex mites that live in the dog’s skin. Reportedly, puppies inherit these mites from their mothers while being nursed during the first few days of life. There are two forms of Demodex Mange — localized and generalized. Both are treatable, but you should seek your vet’s advice on that.

Whether you buy or take your dog from a Cane Corso adoption center, always talk to the people in charge about the dog’s health before taking it home. Also, given the bone and joint problems, consider orthopedic dog beds with memory foam for an adult Corso.

You might think that grooming a dog of the Cane Corso size is a handful, but it’s pretty basic. For instance, since dirty coats can cause infections, we recommend bathing your dog at least once a month.

Cane Corsos have a short coat, but thanks to their undercoat, they’re heavy shedders. That’s why you should brush them weekly, especially during shedding seasons.

Many breeders and associations sell these gorgeous puppies. Unfortunately, you can also find them in shelters.

Are you looking for a dog that will jump in your lap or wag its tail anytime it sees you? Then, a Corso is definitely not for you. Also, if you’re an inexperienced dog owner, particularly with a large, dominant breed, again, this wouldn’t be the right choice.

A Cane Corso needs a firm leader who will have the time and patience to work on that dominant and bossy nature. You should enjoy taking it to agility and obedience classes. Once you build a strong bond, Cane Corsos make loyal and affectionate companion dogs.

10 Types of Monkeys That Will Amaze You 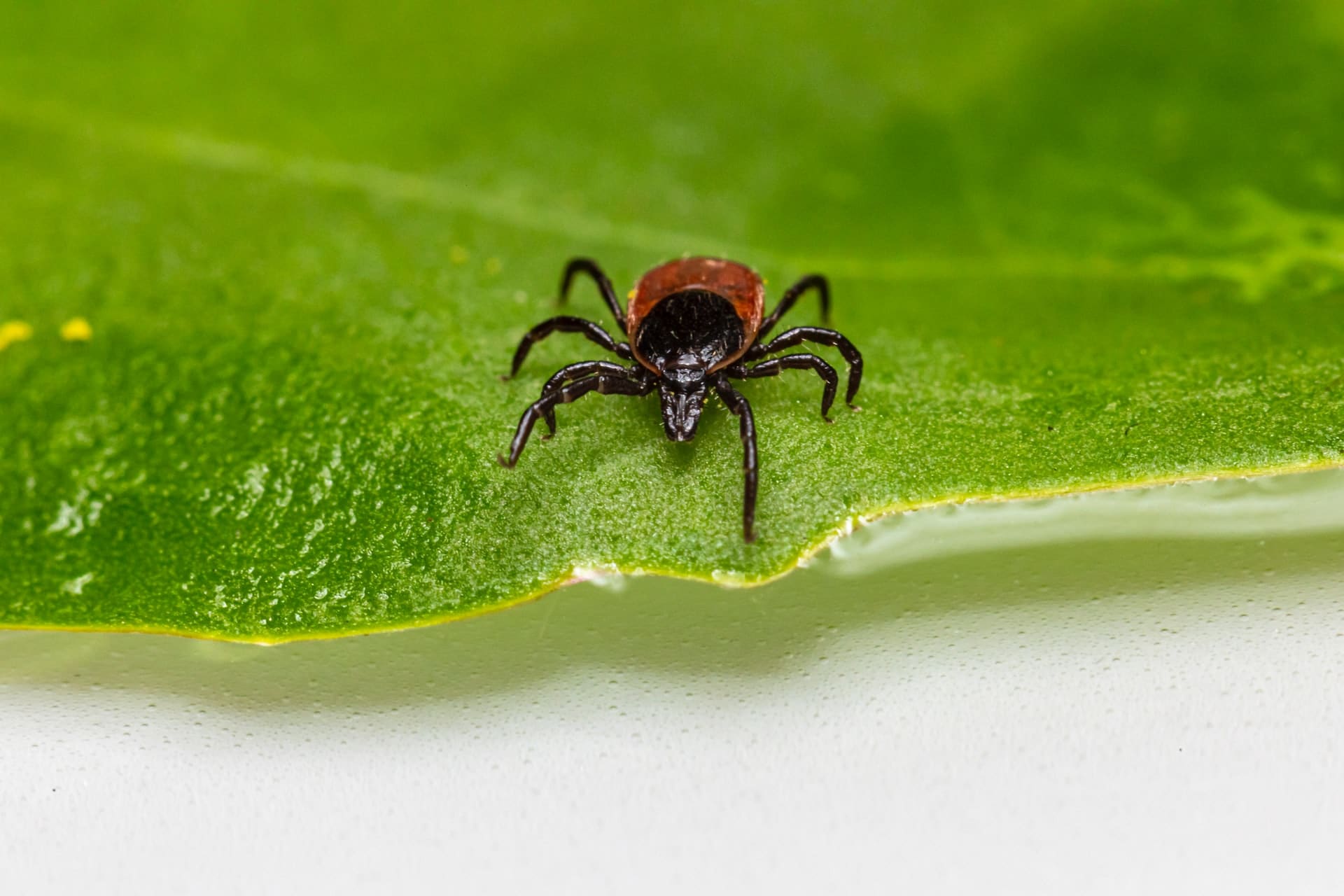 Read More
DDog
Are you looking for a natural tick repellent for dogs? You’re in the right place. Ticks can be… 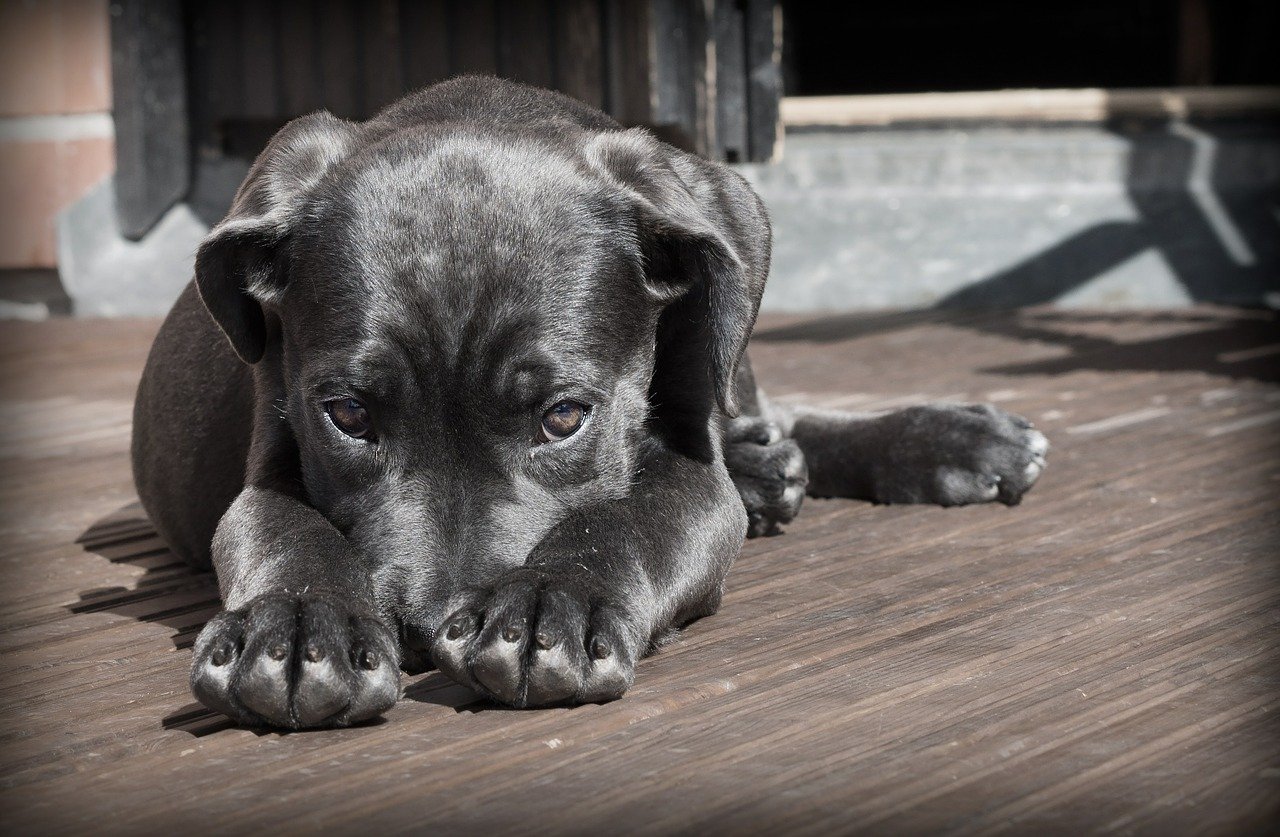 Read More
DDog
A big, sloppy smooch from your puppy can be very sweet unless it comes with a smelly breath.… 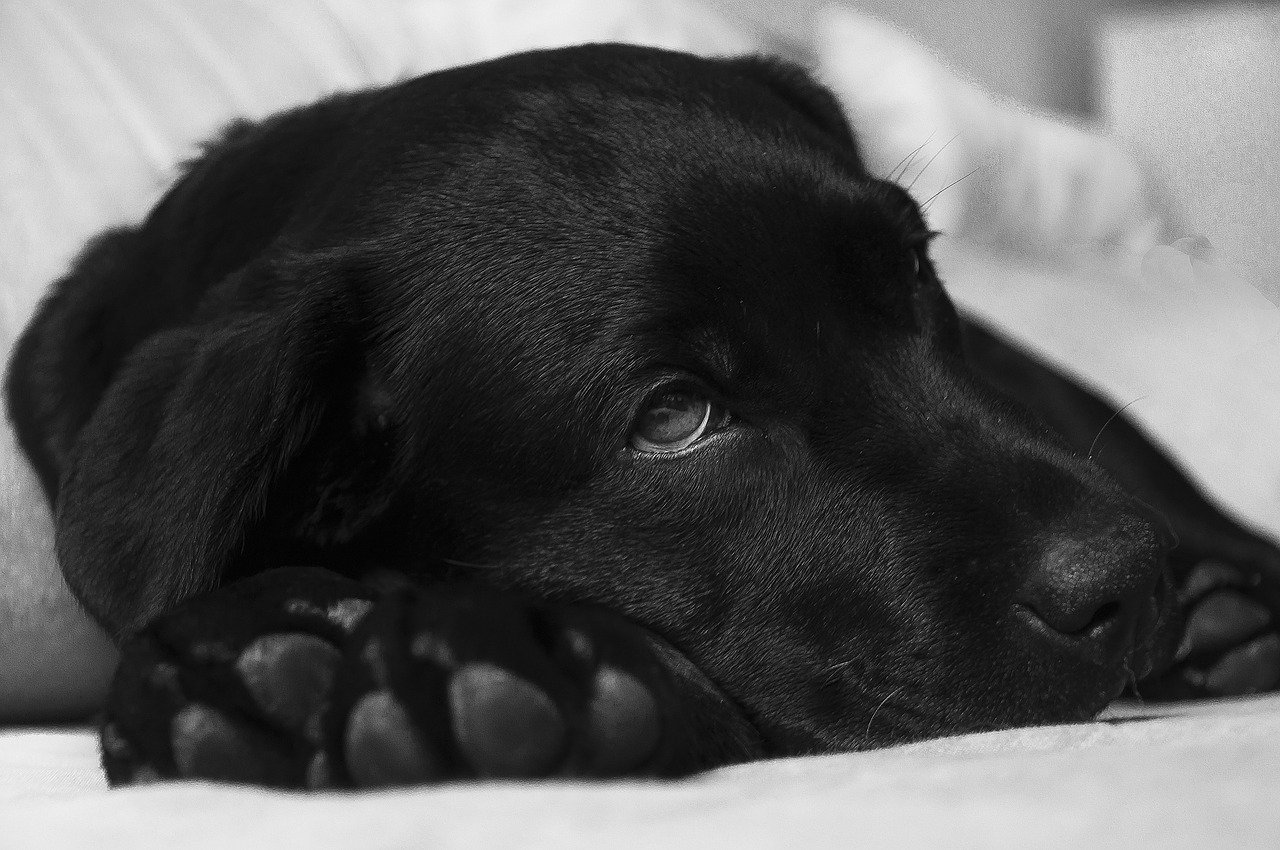 Read More
DDog
“Oh, no, Scruffy, you rowdy rascal, what did you just eat? Bad dog! Spit it out right this… 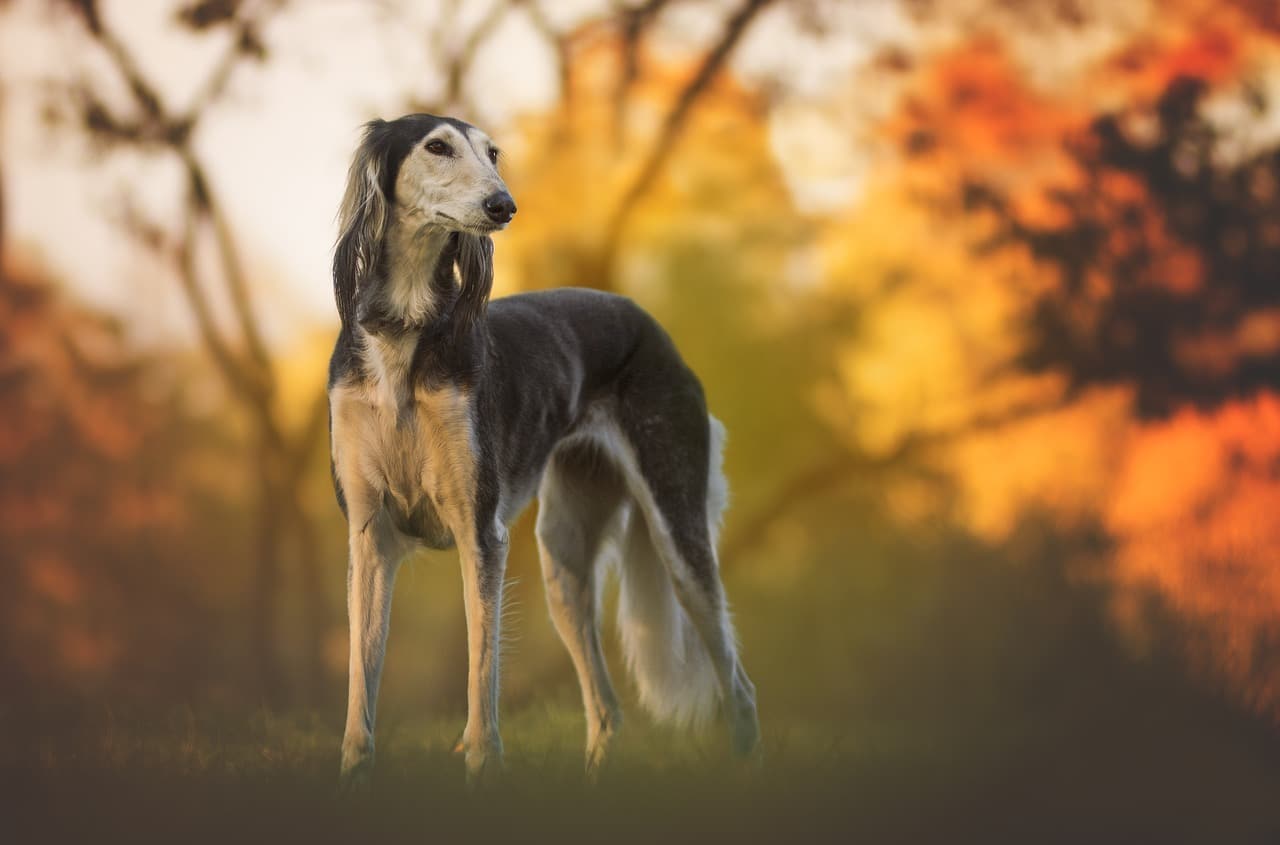 Read More
DDog
For the longest time, people believed that dogs can only view the world in black and white. But…

Read More
DDog
If you want to add a new refreshing snack to your dog’s diet, cantaloupe is the best option.…

Read More
DDog
Imagine it’s dinner time, and you’ve prepared yourself a healthy beets salad. Your dog is drooling next to…