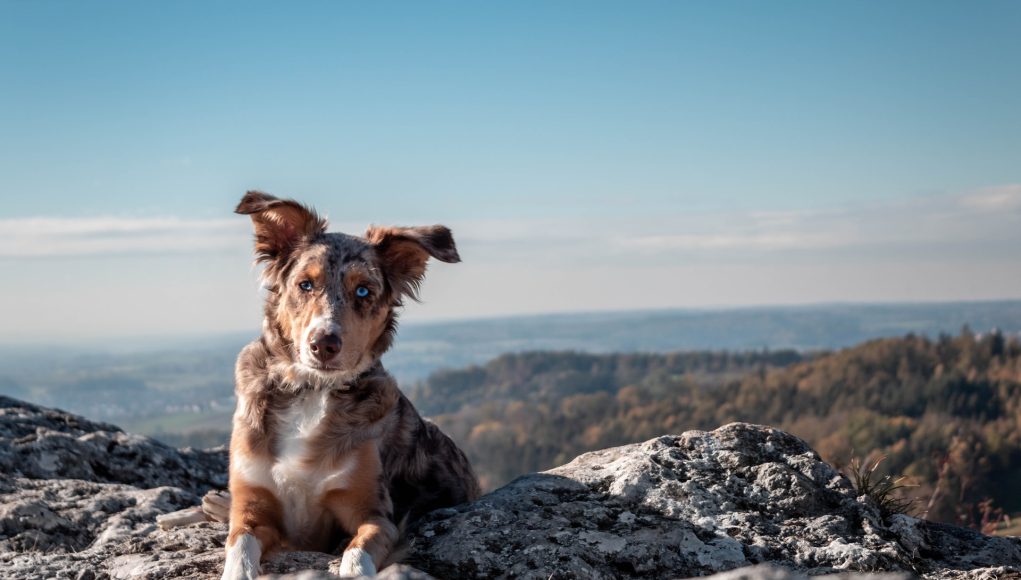 With its unique markings and piercing blue eyes, you can immediately recognize the Australian Shepherd.

It’s the ultimate working dog. But did you know that this Aussie doesn’t come from Australia? Or that Native Americans dubbed it “Ghost Eye” and cherished it as a sacred dog? And, on top of that, these dogs became well-known as rodeo tricksters.

All this proves that these Aussies are truly unique. And we haven’t even gotten to the juicy details yet. We’ll learn all about this fantastic breed:

The breed’s ancestor originated far from Australia. It came from the Pyrenees mountains. The tribe known as “The Basque” were the original inhabitants of these mountains. They were famous shepherds. And wherever there’s sheep, there are shepherd dogs, so their dog of choice was the ancestor of the contemporary breed.

In the early 1800s, the Basques set out to the Australian flatlands — the ideal place for sheep pastures. Along the way, and in Australia, English breeds, like the Collie and Border Collie, were mixed with the Basque’s shepherd dogs.

In the late 1800s and early 1900s, the Basques moved again and set out to the fertile Californian lands. Upon arriving, the local ranchers and cowboys named the breed “Australian Shepherd” since that was the country they most recently came from.

Still, this breed isn’t registered as an Australian native. In the US, however, it’s a staple of cowboy life. Thanks to their livestock herding abilities and quick intelligence, the AKC accepted these dogs into the herding breed group in 1993.

The breed is famous for its striking blue eyes — so striking that Native Americans, more precisely the Navajo Tribe, called them Ghost Eye. Their phantom-like appearance made Native Americans believe that the breed was sacred. Some even avoided the dogs, likely thinking they were supernatural beings with hidden intentions or bad luck carriers.

The Australian Shepherd puppy gained popularity with its unbelievable rodeo performances. Their boom of fame happened after World War I, where people started recognizing how intelligent and trainable the breed is. The Hay Sisler Show had Aussies as its trained dogs, called Stubby, Shorty, and Queenie. They performed outstanding tricks, like jumping on ropes and running through barrels. Some Disney movies also showcased these Aussie puppies. You can watch them in Run, Appaloosa, Run and Stub: The Greatest Cowdog in the West.

If you want to coexist with this fluffy fella, you need to know its main traits. Let’s see what Aussie dogs have to offer.

One thing’s certain, Aussies have a pretty catchy appearance. Their coats are a piece of art, varying from red tricolor, red merle, and all-over black to black merle. There are white Aussies, but experts warn pet owners about them as they tend to grow deaf or blind.

As for their eyes, the Native Americans didn’t call the Aussie dog “Ghost Eye” for nothing. They’re frosty blue but can also come in other colors, like dark brown, yellowish, amber, and green. Sometimes they can even have eyes in different colors. Their fur is medium length, water-resistant, and can be either wavy or straight.

The Aussie Shepherds are medium-sized dogs. Their bodies are longer rather than taller. The males stand at 20”–22” and weigh between 50–65 lbs, while the females are 18”–21” and 40–55 lbs. Many believe that there are miniature or small Australian Shepherds, but don’t get confused — this breed comes in one size only.

The Aussie dog size depends on the breeding purpose. If they’re bred for herding, the puppies are smaller and thinner. That way, they can run quickly and be more agile. Also, they have thinner coats than Aussies bred for AKC performance events with longer coats and bigger-sized bodies.

A dog’s longevity depends on its wellbeing, nutrition, and regular veterinary checkups.

If your Aussie puppy is healthy, eats meals with plenty of vitamins and proteins, and gets regular exercise, its lifetime will undoubtedly be longer. All in all, Aussies fall into the category of medium-sized dogs, so their lifespan is around 10–13 years.

You can prolong that time by feeding your pet AAFCO-approved meals, more precisely recipes that include 5.5% to 8.5% fat, 18% to 22% crude protein, and enough calcium, phosphorus, vitamin A, and vitamin D.

The breed has a medium-length coat, so its shedding is average. These dogs shed a lot in spring, but you can expect to deal with that all year round. It’s best to brush them once a week to keep their coats luxurious and soft. Australian Shepherds don’t need frequent bathing, as long as you maintain their coats untangled.

The Pure Wild Alaskan Salmon Oil is the perfect liquid food supplement for an Aussie dog. It supports regular skin moisture and promotes a shiny coat, all thanks to the omega-3 fatty acids. The recipe is formulated in the US, and it’s entirely free from artificial flavors, preservatives, or synthetic colors.

Aussie Shepherds love to stay busy. Apart from being hard-working, they’re also very sharp dogs and can quickly adapt to any environment.

Don’t be surprised by their dominance. After all, they’re herders, and the desire “to rule” is in their DNA. So you, as their guardian, need to show them who’s the boss. It’s best to do that from the start, as a puppy learns about respect and obedience when it’s young.

These dogs can’t wait to finish their chores and go for a walk, hike, or swim with you. That high energy makes an Aussie puppy the perfect adventure companion, while its guarding instinct will keep you and your loved ones safe wherever you go. But you need to awaken that side of your dog, as many Aussies become naughty if unsupervised and start to bark, dig holes, and steal food from countertops.

As they can herd and guard vast flocks of sheep, they’re undoubtedly intelligent dogs. Aussies have above-average intellect. Thanks to it, they thrive at herding and are fantastic at learning on their own. When it comes to obedience and working intellect, the Aussie is ranked 42nd.

You still need to nurture their minds if you want to feel the brilliance of an Aussie shepherd. That means playing games that will stimulate them mentally, like interactive toys or treat dispensers. Plus, it’s a nice trick to keep your furniture and shoes unharmed.

Aussies can be rescue dogs, police dogs, guide dogs, and hearing assistants. They have a competitive spirit and are ideal for sports involving obedience and agility. Don’t get fooled by their looks, as they can run quite fast.

These skills even won them championships. The world’s most famous agility dog is an  Australian sheepdog named Holster. His outstanding skills won him the Westminster Kennel Club Masters Agility Championship.

To keep up with their high energy levels, pet parents of an Aussie need to provide plenty of exercise. These dogs thrive on vigorous exercise for around one to two hours.

As for the types of games best suited for Aussies, we recommend the following:

Daily walks are also a must. You can take your Aussie dog with you when you run, ride a bike, skate, or hike. If you live in the countryside, it would be even better to let your dog run around freely and satisfy its wild spirit.

Since Aussies are intelligent dogs, they’re easily trainable. After all, they’re also excellent rodeo tricksters. Like any dog, they thrive in training sessions with lots of food rewards and praises.

Aussies are honored to take commands from their owners. You can even teach them to bring you household items if you feel too lazy to get up from the couch every time and grab them yourself. But purebred Australian Shepherds can also be dominant, so show them who’s in charge if you want the training sessions to go smoothly.

Aussies are family dogs, and they can feel a bit lonely if left alone for long periods. That may result in separation anxiety, or they might run off looking for you in the worst-case scenario.

Some common signs that Aussie dogs experience separation anxiety include:

The best way to ease their loneliness is to provide lots of toys when you aren’t around. For extra security, consider a GPS dog collar that will track your pet if they run away.

Aussies are a pretty healthy breed. Still, every dog may suffer from a health condition if the owner doesn’t do regular vet checkups or take care of its wellbeing.

The most common health issues Aussies suffer from are:

It’s hard to tell whether or not a dog has immunity to certain diseases. That’s why you should seek trustworthy Australian Shepherd breeders dedicated to getting the healthiest dogs possible. Also, they should provide certification that the dog’s parents and grandparents have been tested for common defects.

Are Australian Shepherds Good With Family?

With Australian Shepherds, loyalty comes first. They’re incredibly protective of their loved ones and wary around people that don’t know them well. They’ll play with you all day long, as the family is very precious to these dogs. As for little kids, the Australian Shepherd considers them part of the herding crew, so it’s crucial to train your dog to distinguish your kids from a flock of sheep.

It’s best for Aussie dogs if they have a large area where they can run around and satisfy their herding nature. The ideal place would be a house with a fenced backyard or a wireless dog fence since you can easily train them not to pass through it.

The main Australian Shepherd characteristics include the need to herd and spend time with family. Hence, if you provide the proper exercise and daily walks, these dogs can adapt to apartment life. But we don’t recommend keeping these dogs outdoors, as they may become lonely and develop destructive tendencies.

Where Can I Buy an Aussie Shepherd?

There are several rescue organizations around the country where you can get an Aussie. Also, you can find breed-specific rescues dedicated to Australian Shepherds.

If you get a puppy from a breeder, ensure it’s well-socialized and with all the appropriate screening tests, health exams, and immunizations. We suggest looking for a Kennel Club Assured breeder since they adhere to strict guidelines.

You can expect the Australian Shepherd price per month to be around £65. The cost includes vaccines, neutering, food, preventative healthcare, insurance and vet bills, accessories, and equipment like a bed, leash, collar, and dog bowls.

Final Thoughts on the Breed

These exuberant dogs make a loving family companion. Their seemingly boundless energy and high intelligence make them hard-working pets. The Australian Shepherd feels the happiest around family and knows how to get dominant when there’s work to do. Seems like the perfect combo, right?

If you’re browsing through dogs with similar qualities, you can check the German Shepherd’s characteristics. These breeds get easily confused and very frequently mixed up in breeding.